Now is the Perfect Time to Boost Your Mental and Physical Health!

More than ever before now is the time to boost your mental health and become the trailblazer who leads through these challenging times of COVID-19. By gaining insights to strengthen their mental and physical health to advance their lives and positioning to launch into the "New World" when the pandemic is over!

You are in home isolation with your family and you have no space, your life is noisy, chaotic and confined? You are in overwhelm?

You are struggling with working from home, developing a routine and getting work done?

You feel fearful all the time and worrying about how you are going to survive this self isolation!

You are living in a constant state of flux, suffering mood swings, feeling anxious and sad!

Every day is such a struggle.

Boosting your mental health will set you up for success!

By the end of the "Boost Your Mental Health" 90 Day Coaching Program you will: 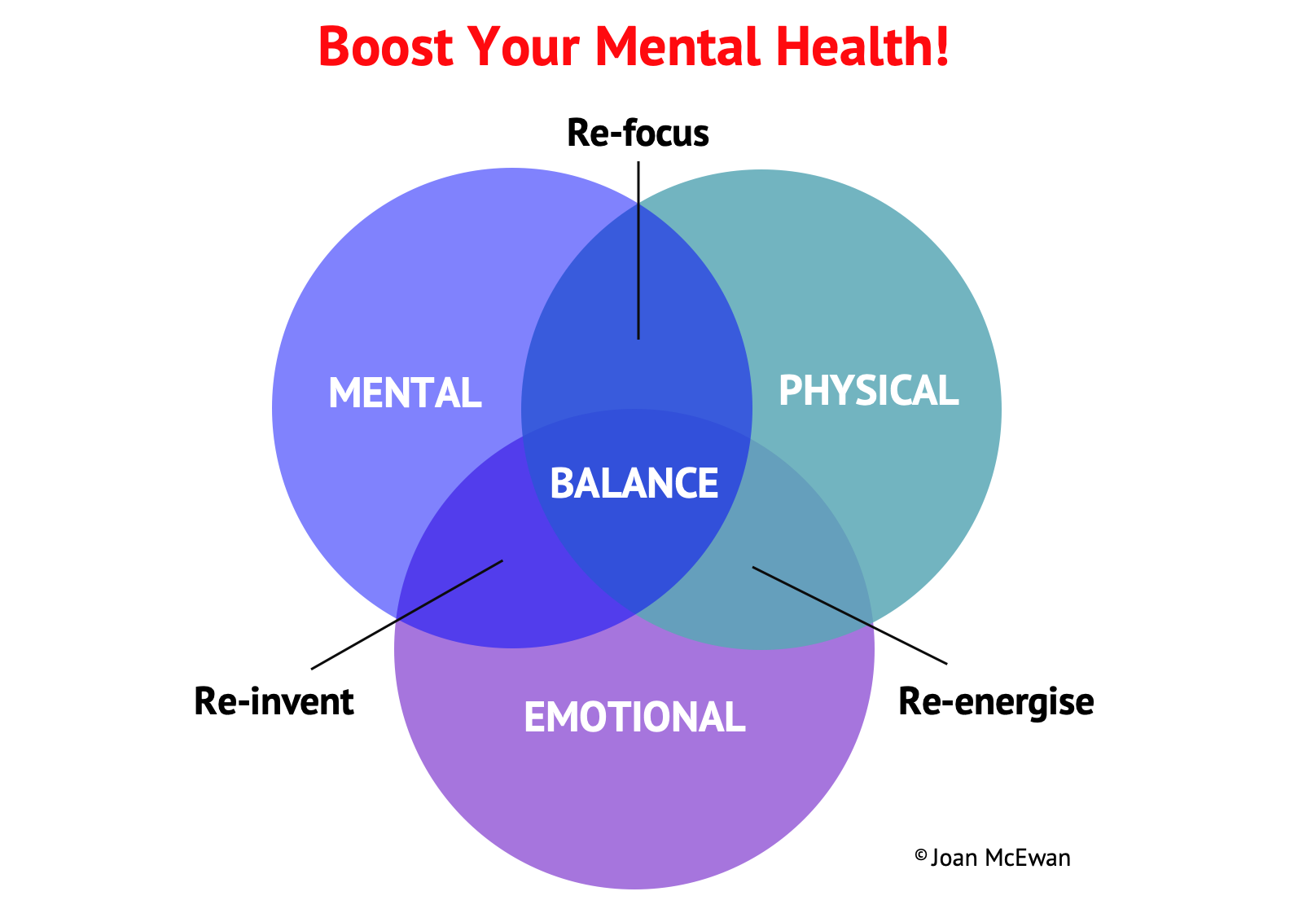 Build skills and techniques that create an integrated body and mind with robust Mental Health capabilities.

Ready to ride out this pandemic and launch into a new way of life as the mentally robust trailblazer with your body and mind grounded. Providing clarity and an inner confidence that amplifies your energy.

When your Mental health needs a boost:

⇒ The most common mental disorders are depression, anxiety and substance abuse disorders

⇒ 1:7 Australians will experience depression in their lifetime

I’ve noticed things change when you have a coach who understands your world and your challenges and is equipped to help!

I pride myself on having decades of experience with a strong background in health and wellness, coupled with my substantial qualifications. My senior leadership positions with world leading organisations, as well as a mix of Eastern and Western philosophies, I can work on a subliminal level with a persons’ energies to rebalance, reenergise, revitalise, and increase their vibration.  I have a robust foundation that allows you to be empowered to do the work so that you can maintain, flourish, and amplify your energy.

What I find in my industry is that there is many different levels of health and wellness practitioners. I see everyone holistically across all facets of health, exercise, nutrition, and wellness through to energy and wealth abundance.

I think of my role in how I help others is like being a master key.  I unlock the unique code that assist you to step into your personal power through prioritising health and wellbeing.

CONTACT US TO FIND OUT HOW THE "BOOST YOUR MENTAL HEALTH PROGRAM" CAN HELP YOU?

This is a dynamic coaching program designed for you over 90 days or 6 months.

Enquire now to find out how you can change your life by re-setting your mindset! Time to step forward and boost your mental health and build your foundation. Make a difference in your life and others...

With over 20 years of clinical experience and 15 years in corporate leadership, it has always been my mission to make a difference and create change.  Let me take you on a bit of a journey to how I have become known as a Transformational Health and Wellness Expert. To read Joan's full story, click here.

I have created my legacy by starting my own transformational health and wellness practice.

Now I consult to heart-centric organisations to help implement their health programs as well as mentoring and coaching high performing women.

I help ignite intuition and light people up from the inside-out.

What some have said:

I have been working with Joan to support me in levelling up my health and wellbeing. Being a female business owner, speaking, traveling, running workshops and coaching easily depletes energy stores quickly so I really wanted to work with someone who understands the type of business I was running, the pressure of high performance and who understands me.

We have just started and I am already noticing a shift in my energy and focus. I'm pleasantly surprised that I have got through my first week of no sugar and caffeine! Her holistic and balanced approach has also helped me to identify some areas in my business that I want to "show up" more in and put strategies in place to have the energy do that.

I'm so grateful to have her in my corner and can highly recommend her to other business owners, leaders and especially women trying to juggle it all!

Recently I had a session with Joan about the importance of maintaining my energy levels when working closely with clients. I really appreciated Joan’s insights - particularly the ones related to the weight of food (I had no idea this would impact on my energy - but yes it does!). We talked about developing new ways to express myself going forward into 2020 & ways to enhance my capacity to strongly step forward. Joan’s guidance was amazing & so very much appreciated! So if you are looking for insight, powerful commentary in amongst passionate support, Joan is who you need to talk to!

Jessica Ritchie, a Brand Expert and busy mother of two said, “As a business owner who specialises in helping women form their identity through branding and marketing, I have a critical eye and attention to detail in finding the right person who I think is the right ‘fit’ and that can help me. I found Joan ticked all my boxes through her high credentials, experiences, and qualifications. I didn’t want a ‘fly by night’ kind of person, I wanted the real deal. One of Joan’s’ superpowers is being able to channel a person’s energy and kindly yet firmly create a plan that propels you to becoming your best, highly intuitive self. To live in flow and step into your personal power with a tailored plan to unlock your unique code is pure gold. Thank you, Joan!”

Joan is an effective strategic thinker and leader. She provided the vision for the health and well being function in QGC, developing, implementing and embedding a cost effective health function. She is effective in managing costs, budgets and delivering projects on time. She developed and implemented a compliance framework and ensuring action plans were closed out. She demonstrated strong support for cultural change that were reflected in her programs of work.

Joan was the featured speaker at my Rotary Club recently at my invitation. I am so glad she took the opportunity as Joan is a purposeful and enlightened speaker. Her story kept the audience rapt, and there were quite a few questions at the end where Joan expanded on her subject. I would thoroughly recommend Joan as a speaker at your next event!

Joan is an insightful and purposeful coach. Her book ‘Show Up’ is a well written encouragement for female leaders to create a more inclusive workplace and lead with their heart and minds. It provides you with relevant research, practical points and a holistic wellness approach to improve your own performance and life quality. I would recommend this book to any female leader who wants to be their best and lead by example!

“Joan rapidly established herself within the workplace as a technical expert. Joan’s work spanned planning, contractor and contract management, strategic and operational risk oversight and assurance functions. She was also a key member of the crisis management and business continuity teams. In a climate of intense scrutiny, by transforming the health performance, Joan helped the business retain its social licence to operate. Her expertise is unquestionable and as a manager, she is a focused, unshakable and passionate leader".